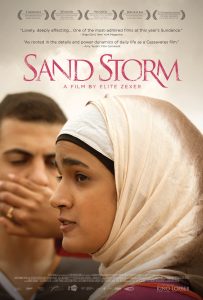 When a Bedouin patriarch takes a second bride, his first wife chafes against her changing status while her daughter chasses her own dreams of autonomy.  As their lives shatter, these women struggle to change the often unchangeable rules, each in her own way.  Sandstorm portrays a tradition-bound Arab culture whose men enjoy the benefits of a way of life that oppresses women.

Your ticket for the: Film Discussion